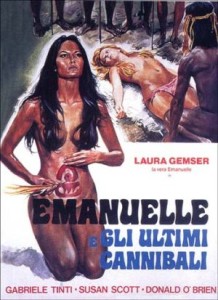 Sorry. You get no counter-culture cachet for knowing anything about the EMMANUELLE films. Go ahead if you like: spell her with two m’s; spell her with a less canonical single m; try spelling her with a positively uncanonical pair of n’s; modify her, even, with black or any other color. I don’t care. You will not win my regard. What you do win though is the privilege of skipping these introductory paragraphs, or — even better — the foresight to avoid every film whose title bears the name Emmanuelle or any of its various variations. That is prize enough. 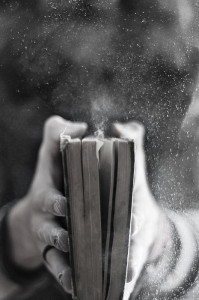 It began with a book. Dog-eared, broken-spined, pages smudged with strange and unpleasant fingerprints. The book was passed from hand to hand in Parisian back-alleys, left for the curious or the unwitting in Provincial outhouses. It was one of those word-of-mouth, had-to-know-somebody sort of things, the kind of thing that used to exist before the internet made it possible to know everything without knowing anybody. The book was authorless; the book was enigmatic. It enjoyed nearly a decade of clandestine fame before finally receiving a proper printing and a proper author in 1967. After that, the word was out . . .

Emmanuelle does the nasty. 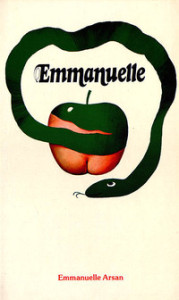 But don’t worry. We’re getting there. 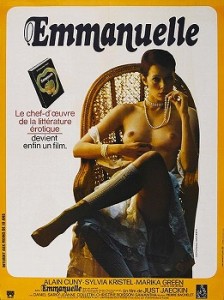 Ok. So. There is an old and robust cinematic tradition wherein 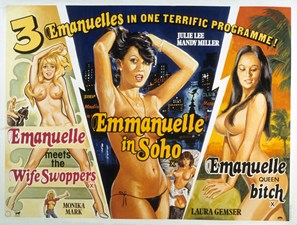 successful films are, immediately upon success, emulated, reimagined, borrowed, or just plain ripped-off, shot with different, more ambitious actors and with different, more monosyllabic dialogue, and with a considerably shoestringier budget, all as a loving and nonconsensual gesture of gratitude towards the successful film’s original copyright holders. EMMANUELLE was in no way exempt from this tradition. In fact, she just might be one of the most homaged films in all of film history.

(It took nearly twenty years but they finally sent Emmanuelle into space. . . . And then they did it again. Seven more times.) 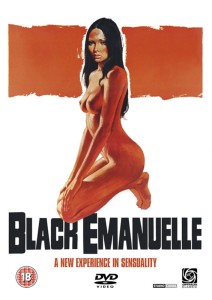 Among these many tributes is a film from 1975 called BLACK EMANUELLE. Emanuelle with one m. The Emanuelle of this Emmanuelle was played by actress Laura Gemser, who, though perhaps “exotic” to some, is in fact black to none. As if that’s not ruse enough, “Emanuelle” is actually the character’s nome de plume. Non-black Mae Jordon is a journalist who travels on assignment to strange shores and sundry lands, publishing accounts of her exploits under a penname that I’ve already typed so many damn times that I’m not going to type it again until at least the next paragraph — maybe not even then. Unsurprisingly these adventures keep to a sort of erotic itinerary. This time around she’s in Africa. This is justification of the word “black” before . . . that . . . name.

Though the film is set in Africa — and despite the fact that Africa is a land associated with tribalism and where accounts of cannibalism are at least imaginable if not actually groundable in anything other than lily white fear — despite all this, there is no cannibalism in BLACK WHATSHERNAME.

Seriously though, we’re getting close.

EMANUELLE AND THE LAST CANNIBALS

In 1976, Joe D’Amato made a sequel to BLACK EMANUELLE called 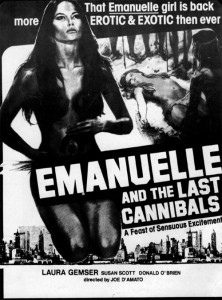 But before you click-off — or whatever it is that Emanuelle inspires you to do — consider the following piece of unbelievable and uncanny trivia. I swear I’m not making this up. 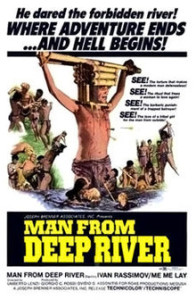 Umberto Lenzi, director of the first of all cannibals movies MAN FROM DEEP RIVER (the source, of course, for one of the two cinematic streams — the other being Emmanelle herself — that later would find their glorious confluence in EMANUELLE AND THE LAST CANNIBALS) says of the origin of that earlier film the following: “The idea [for MAN FROM DEEP RIVER] was suggested by Emmanuelle Arson [!!! WTF!!!], the famous author of Emmanuelle. She’d married a French diplomat and become a writer. But she herself was Thai, or maybe Burmese, I don’t remember. She knew about many, many tribal legends and other anthropological facts concerning that part of the world. I was attracted to the idea and started to prepare a story based on her suggestions.”

And so, as it turns out, the sewing machine is the long lost sibling of the umbrella.

One thought on “Emanuelle and the Last Cannibals”