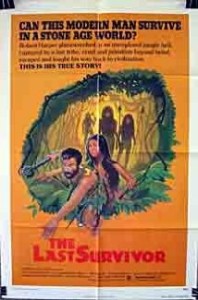 So, the following review is about JUNGLE HOLOCAUST, a movie which contains some pretty reprehensible content. If you think it may spoil your mood or your day to read about things like animal mutilation, exploitation of indigenous peoples, ethically indifferent cinematic depictions of cannibalism, violence against women, sexual assault, and human brutality, please consider not reading any further.

And definitely do not watch JUNGLE HOLOCAUST. 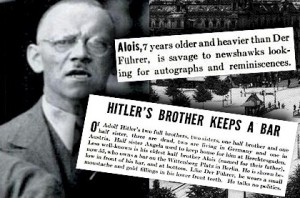 JUNGLE HOLOCAUST (aka LAST CANNIBAL WORLD, aka ULTIMO MONDO CANNIBALE, aka other things too — and aka JH, at least in the remainder of this review) was made in 1977 by director Rugero Deodato. This same Deodato a few years later would direct what pundits in magazines as mainstream as Wired and Entertainment Weekly (seriously?) have called one of the most controversial films ever made — that later film of course being 1979’s CANNIBAL HOLOCAUST.

“I swear I didn’t kill all those animals!” 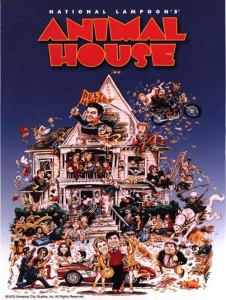 Unsurprisingly, like its predecessor MAN FROM DEEP RIVER, JH features copious and shameful amounts of animal cruelties. Director Deodato promises us he had nothing to do with that. The producer (one Georgio Carlo Rossi, silent in his grave now, but seen briefly, cameo-style, flying a rescue chopper near the end of JH) inserted those scenes — against the protests of both Deodato and star Massimo Foschi — in order to satisfy the stringent demands of the East Asian film market, which that same year wouldn’t allow even a screening of NATIONAL LAMPOONS’ ANIMAL HOUSE without the addition of enough fuck-the-SPCA-style footage to justify the addition of the phrase “OF HORRORS” to the film’s title. Anyway, Deodato didn’t want those scenes in his movie, and, as a matter of fact, Massimo still reminds him about this once in a while. 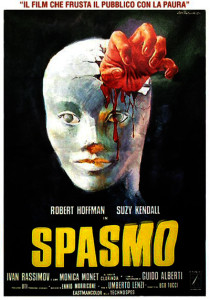 The producers of MAN FROM DEEP RIVER, hoping to strike gold twice in cannibal county, wanted to make a sequel. To this end, they attempted to reassemble the original team. Actors Ivan Rassimoff and Me Me Lei were on board. Could director Lenzi be lured back? In the intervening years Lenzi had made a modest name for himself directing films like ALMOST HUMAN and SPASMO. His stock had risen, so he attempted to negotiate for a 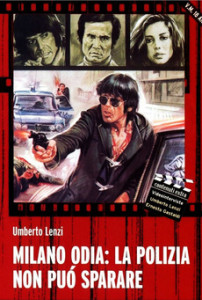 better deal. Keeping in pace with the success of the first film, Lenzi asked for a salary that was three times higher than what he had been paid to direct last time. Rossi wouldn’t budge. Even after Lenzi offered to slaughter three times as many animals, reasoning that this would surely equal three times as much revenue in the East Asian Market, Rossi remained inexorable. Instead, the prudent producer turned to Deodato, who worked cheaper.

Despite having a different director, the new film pretty much relies upon the same basic premise as MAN FROM DEEP RIVER. Just like John Harris in the earlier film, Robert Harper is taken prisoner by a group of natives, and in order to escape he has to become one of them. But unlike DEEP RIVER, this doesn’t lead to him submitting to painful — or at least irksome — initiations rituals. His transformation into a “savage” is forced on him. He has his western clothes ripped off of him, which is a rather graphic metaphor for what the natives do to his western psyche. He wants to escape. In DEEP RIVER, John Harris marries the beautiful native woman. Here Robert Harper kidnaps her so that he can have a guide through the jungle to lead him back to his plane. 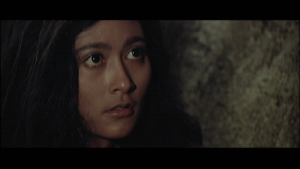 This kidnapping results in a “romance” between Harper and Me Me Lei’s character. This is definitely one of the most squeamishly uncomfortable aspects of this already squeamishly uncomfortable movie.  It begins when Foschi, locked in his cave-cell, begs Lei for water and . . . well, better let Deodato explain in his own words: “The girl misunderstands and thinks that he has sexual desire. So, to please him, she tries to use her hands, but he doesn’t want that. All he wants is to eat.” It’s an awkward scene. Harper sits there, shaking his head, crying, while enduring unbidden manual manipulation. If you watch the DVD with the commentary on, Deodato will tell you, “I like this scene. It’s gentle.”

Later, after Harper breaks out into the jungle, Lei proves herself an intractable and rebellious guide. So Harper rapes her. Now she behaves in accordance with the native equivalent of submissive housewifery, preparing him a wonderful breakfast. Again, better let Deodato explain: “He is trying to possess her just like he saw the natives take their women. It’s one way of trying to subdue the girl who is still resisting him and is trying to escape. In fact, after the scene she will behave like a woman, a woman from the tribe, a native woman.”

There’s nothing that I can say. 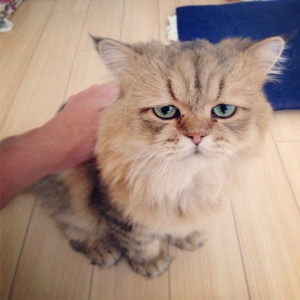 The opening title screen tells the viewers that the film is based on a true story. In the DVD’s director commentary the interviewer questions Deodato about the truth of the film. Deodato explains that the truth of the story was based on two things. First upon the story of Michael Rockefeller who famously disappeared in the Jungles of New Guinea in 1961 inciting speculation that he might have been eaten by cannibals. Second, upon the fact that the natives depicted in JH were in fact real natives who (supposedly) really lived the way the film depicts them as living. In Deodato’s words, duly translated, JH is “a true story upon which I built a fantasy.”

The natives who “act” in this film actually were real natives and they really lived in that big cave. They were (or at least may have been) featured in an issue of National Geographic that Deodato had seen. To critics who claim that he exploited them, Deodato replies, “They were happy because they could finally eat without having to go hunting to secure their food. We gave them everything we had.”

And they got to be in a movie too. That’s pretty cool.

Incidentally, Deodato put the natives in wigs. Here’s why:

“In our culture we are used to seeing cannibals with long hair. These men, on the other hand, had very short hair, really short, the type of haircut a black man might have. I did not like it, so I asked them to wear wigs, but it was not easy, because they kept removing them and laughing, because they thought we were dressing them up as women.”

Can anything good be said about this movie?

Clearly, the cast was dedicated to this film and an impressive amount of effort was exerted. You don’t run around naked in a snake infested jungle, you don’t allow yourself to be dropped from a three hundred foot high ceiling with nothing but hemp rope between you and death, you don’t allow yourself to be groped by strangers and peed on, unless you really believe strongly that you are doing something meaningful and important. I think it’s pretty clear that the people involved in this film really believed in what they were doing.